Stubby: A True Story of Friendship by Michael Foreman - ESSENTIAL 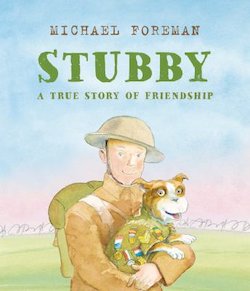 As a soldier trains with his unit, getting ready to join others fighting during WWI, a stray dog adopts him as his master, and goes all the way with him across the ocean.  Named Stubby, he joins the men in the trenches and in battle, earning medals of his own.

Such a cute look at a dog that helped his fighting unit in so many ways.  It’s a well crafted overview of the kinds of action during WWI or the life of a soldier. Just enough back matter for those interested in the truth of the story, plus an actual photo of Stubby!