The Twelve Days of Christmas by Britta Teckentrup - ADVISABLE 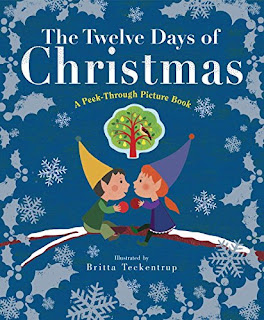 EL (K-3), EL, GIFT--ADVISABLE
For twelve consecutive days leading up to Christmas, the narrator's true love gives them a variety of gifts. The number of gifts corresponds to the day--1 gift on the first day, 2 gifts on the second and so on. As the days go on and the gifts increase in number, the illustration of the "Pear Tree" from Day 1 gets larger and larger. The cut-out illustration grows, showing off the increasing number of gifts as each day passes.

I absolutely fell in love with this cute little picture book. The two "lovers" are simple elf-like illustrations and it is great to see what they are doing on each page. The cutouts are fun and kids of all ages will enjoy seeing what each day will bring. Due to the nature of cutouts on a paper page, this book is rather delicate and could quickly be destroyed in the hands of the youngest readers. It would also make a wonderful gift for the holiday season.

Don’t Wake Up the Tiger by Britta Teckentrup -ESSENTIAL 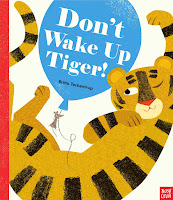 Teckentrup, Britta Don’t Wake Up the Tiger.  PICTURE BOOK. Nosy Crow (Candlewick), 2016. $15.99.
PRE-K – ESSENTIAL
A group of animals need to find a way over a sleeping tiger. They have some balloons that come in handy, but what helps the most is interaction from the reader, who is asked to pet the tiger and blow the balloons. Thanks to the readers, everything looks like it will end well, unless that mouse can’t hold onto his balloon.
This is an adorable and wonderful book! It would be a joy to read with a Pre-K child. I wish more books required interaction from the reader, children have so much fun with that! The story is great too, especially the surprise ending. The artwork is simple and bright enough to share with a group. 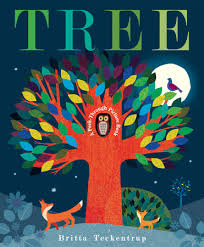 PRE-K, EL (K-3) – ADVISABLE
Owl watches the world from his tree.  He sees other animals and birds, but most notable is the change of weather.  The book begins with winter and goes through all four season, ending a year later in the spring.  The owl is cut out of the pages and as the other animals climb in the tree their silhouettes are cut out as well.
This book has cute illustrations and is a fun addition for a lesson on seasons.  The story rhymes and is poetic about the seasons.  There’s not really a story as much as an observation of the changing of the seasons from the owl.