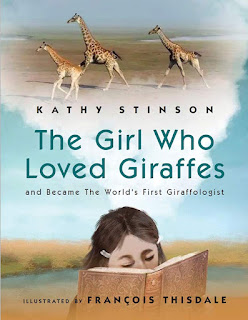 When Anne Innis was a little girl, she saw a giraffe in a zoo and decided she wanted to study giraffes when she grew up. After attending University and winning prizes in Biology, she headed to Africa - an unbelievable journey for a woman alone in the 1950s. And there for a year, she studied the majestic and beautiful animals, becoming a leading authority on giraffes. Unable to get a University position when she returned (despite her PhD) she turned to writing, authoring books about animals, women's rights and other things. The pace and the amount of information was perfect - full page, photo quality illustrations are they background to 1 or 2 short paragraphs of biography, and then a few short notes about Giraffes.

Oh, I want to see the movie about her now - 10 minutes ago I'd never heard of Anne Innis and now I want to meet her and see her beloved giraffes. The author's note wasn't a retelling as much as it was a more telling. The publisher's note says she is thrilled with the book and hopes it will inspire young readers to love the giraffes - I'm sure it will.

The Sun Shines on the Sea by Michael Slack - ESSENTIAL 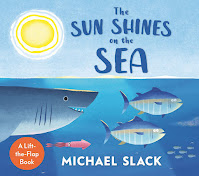 Beginning with the sun heating up the ocean, the reader follows the food chain from the phytoplankton on up to the larger creatures like sharks and whales. As the chain moves on, readers can lift flaps to see which animals (ex. sharks) have eaten smaller creatures (ex. tuna).

I really enjoyed this early introduction to a basic earth sciences concept. The illustrations are well done and the story isn't boring but not overtly flashy, either. This is a great choice for Pre-K audiences--especially those showing an early interest in science and the marine world. 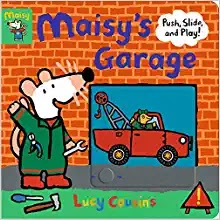 Maisy, a mouse mechanic, is going to fix her friend's car. Inside her garage, the reader gets to push, slide and play with a number of interactive pieces while Maisy does her work.

This is a cheerful little board book that kids will like for the interactive element. The illustrations are boldly colorful and the story exists in its simplest form just to serve the pushing, sliding and whatnot. Sure to be a winner with the youngest of readers.

Email ThisBlogThis!Share to TwitterShare to FacebookShare to Pinterest
Labels: advisable, board book, high 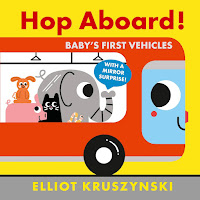 In a board book clearly designed with babies in mind, readers discover a variety of vehicles from bikes to rocket ships. Each page has one line of text, some fun onomatopoeia, and boldly colorful illustrations. The final page has a mirror "surprise" for babies to see themselves in the vehicle.

This is the sort of board book I'd recommend giving to young families--its got that comfortable, traditional feel to it and is straightforward in what it offers a reader. I loved pretty much everything about it--a winner of a board book!

Email ThisBlogThis!Share to TwitterShare to FacebookShare to Pinterest
Labels: advisable, board book, high 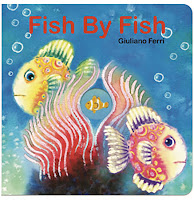 This is a fairly mundane board book. The illustrations are colorful but the story is about as one dimensional a tale as you could come up. A good choice if you simply want a colorful story for babies to look at.

Email ThisBlogThis!Share to TwitterShare to FacebookShare to Pinterest
Labels: average, board book, optional 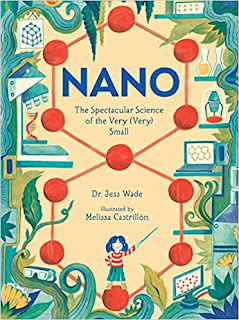 Nano: the spectacular science of the very (very) small by Dr. Jess Wade, illustrated by Melissa Castrillon. NON-FICTION PICTURE BOOK. Candlewick, 2021. $18. 9781536217667
BUYING ADVISORY: EL - OPTIONAL
AUDIENCE APPEAL: LOW
Wade takes us for a quick look at what nanoscience is and some ways is currently being used and a way it might be used in the future.
I found a disconnect between the subject of the book, the amount of content, and the illustrations. If I have a teacher specifically teaching about nanoscience, I might invest, but otherwise, I find the disconnect and the jerk from subject to subject to be off-putting.
Cindy, Library Teacher, MLS
at 11/25/2021 10:00:00 AM No comments: 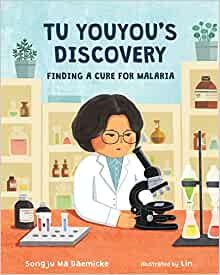 Tu Youyou’s Discovery: Finding a Cure for Malaria by Soungju Ma Daemicke, illustrated by Lin. NON-FICTION PICTURE BOOK. Albert Whitman, 2021. $17. 9780807581117
BUYING ADVISORY: EL, MS - ADVISABLE
AUDIENCE APPEAL: AVERAGE
After a serious bout with tuberculosis in the 1940s when she was 15, Tu knew that she wanted to be a medical researcher and help others heal too. When malaria made a huge resurgence in China, and wasn’t being cured by typical Western medications, Tu looked into Chinese herbal medicines. It took her and her team several years, but they finally find a plant and a preparation that did the trick. It wasn’t until 2015 that Youyou was recognized for her persistence.
A great look at the process for compounding treatments, the contribution of herbal medicine to modern medicine, and, of course, the undervalued work of women in even the recent past. While the illustrations are childish, the information is still well worth reading with a middle school, especially if your science classes cover any of the topics.
Cindy, Library Teacher, MLS
at 11/25/2021 09:00:00 AM No comments: 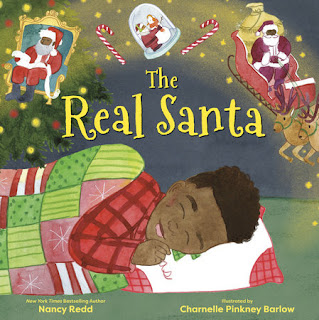 The Real Santa by Nancy Redd and Charnelle Pinkney Barlow. PICTURE BOOK Penguin Random House, 2021. $18. 9780593178140
BUYING ADVISORY: EL (K-3) - ADVISABLE
AUDIENCE APPEAL: AVERAGE
It's Christmas, and one of his favorite traditions is the Santa figure his grandparents bring on Christmas Eve. This year it's a Santa with a list, and yes, his name is on the list. When it's time for bed, the boy wonders which is the real Santa? So, he tries to stay up all night to get a picture.
The sweetest illustrations - everyone in their matching pajamas. I loved the nod to Redd's "Bedtime Bonnet" as the family reads that a story together. A great Christmas book about Christmas traditions. and finding Santa.
Lisa Librarian
at 11/24/2021 12:00:00 PM No comments: 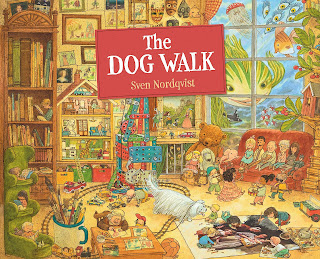 The Dog Walk by Sven Nordqvist. PICTURE BOOK Floris Books, 2021. $20. 9781782507437
BUYING ADVISORY: EL (K-3) - ADVISABLE
AUDIENCE APPEAL: HIGH
A child takes grandma's dog for a walk. But, this is a very unusual place, because the child boards a train into some wonderful, crazy illustrations with so much to see.
The child and the dog can be searched for in every illustration - sometimes they are there more than once. Lots of paths to follow in one illustration, an amazing zoo in another. A beach, a desert, my favorite was a library, (I think, maybe it was a museum?) I keep going back in to took again. A great book to get lost in.
Lisa Librarian
at 11/24/2021 11:00:00 AM No comments:

A Peek at Beaks: Tools Birds Use by Sara Levine and Kate Slater - ESSENTIAL 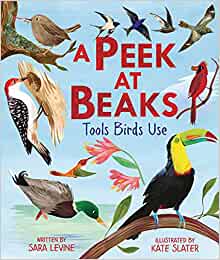 A Peek at Beaks: Tools Birds Use by Sara Levine, illustrated by Kate Slater. NON-FICTION PICTURE BOOK. Millbrook (Lerner), 2021. $20. 9781541587342
BUYING ADVISORY: EL, MS, HS - ESSENTIAL
AUDIENCE APPEAL: HIGH
Fascinating! Levine tells us about all kinds of birds and their useful beaks. Slater’s illustrations compliment the text perfectly. Any age science class that talks about adaptations can fit this in with glee.
Cindy, Library Teacher, MLS
at 11/24/2021 10:00:00 AM No comments:

More Than Just a Game: The Black Origins of Basketball by Madison Moore and Lonnie Ollivierre - ADVISABLE 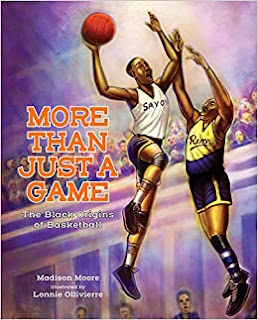 More Than Just a Game: The Black Origins of Basketball by Madison Moore, illustrated by Lonnie Ollivierre. NON-FICTION PICTURE BOOK. Albert Whitman, 2021. $17. 9780807552711
BUYING ADVISORY: EL, MS - ADVISABLE
AUDIENCE APPEAL: AVERAGE
Basketball originated within the walls of the segregated YMCAs in the late 1890’s. Soon it was played by all over the U.S. – even by Blacks, who had first been left out. Before the formation of the NBA, Black players formed Black Fives teams to play each other and also some white teams. Now more than 70% of the NBA players are Black.
I loved the introduction to the Black Fives and their place in basketball history. The denser text makes this a book best for older elementary students, and can perhaps reach up to middle school in places with a robust picture book collection.
Cindy, Library Teacher, MLS
at 11/24/2021 09:00:00 AM No comments: 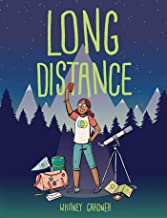 Vega's two dads have moved her to Seattle, Washington and she is struggling about leaving her best friend behind. In an attempt to help Vega get to know new people, her dads sign her up for a summer camp.  Vega feels socially awkward, and the camp has a weird vibe, but slowly she starts to make new friends. The new friends also notice that there is a boy who seems to live at the camp full time and the counselors aren't who they appear.  The clues are stacking up to make this the weirdest summer camp any of the campers have ever attended.

I loved Fake Blood by Whitney Gardner, so I was excited to read this.  I liked Fake Blood better as this gets way out there and at a point I felt like I was watching a Saturday morning cartoon gone wrong. However, I like Vega and I think her struggles socially are something most kids can relate to.  Although the plot gets very sci-fi strange, I enjoyed the unpredictable plot.  The image are well done, bright and attractive and for those kids who devour graphic novels, this book will be a hit.