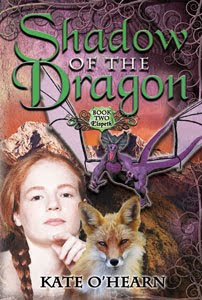 Kira, her siblings and her friends have freed the captive girls and escaped Lord Dorcon’s forces – but something has gone awry. While Kira and most of the group has stayed together, they have been thrust 3000 years into the future. Elspeth, however, has been propelled into the past – just before the beginnings of First Law – with only her dragon and Onnie, the fox, for company. Only with a great sacrifice on the side of Paragon will the two groups be reunited. But even if they do make it safely back to their own time, they still have to contend with King Arden, but more importantly they will have to evade Lord Dorcon.

I sat down late one night and read this from cover to cover! I couldn’t stop because I was so engrossed. It is so nice that the second book in the series is as good as the first. Is there a third? I don’t know, but I certainly hope so!