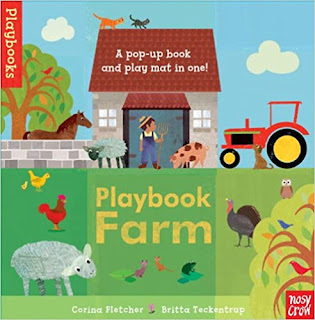 Fletcher, Corina Playbook Farm, illustrated by Britta Teckentrup.  Nosy Crow (Candlewick), 2012.
Pre-K, GIFT – ADVISABLE
Part board book, and all play mat - I think I’m in love.  A two-sided book that you might think is just a pop-up – however, the whole thing unfolds to a large-sized play area, complete with figures to move around.  My only regret is that the figures supplied don’t really stand up at all.  I managed to fix mine with some binder clips, but not everyone will think to do that.  Most kids will want some farm animal friends that stand up on their own.
Cindy, Library Teacher
at 11/19/2012 01:00:00 PM No comments: