Project Me 2.0 by Jan Gangsei - ADVISABLE 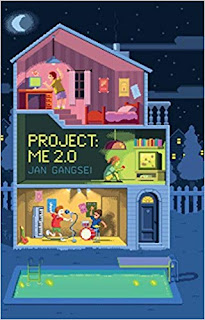 When Anna Murphy moves back to town after being gone for five years, Farley, 11, decides its time to improve himself.  He finds a self-help site online and when he clicks on the link and fills out the forms, he finds himself with his own self-help guru – a little 8 bit surfer dude Online Master, Tomy, who isn’t going to actually leave Farley alone until he accomplishes the entire program.  Now Farley has to keep Tomy secret from his family and actually figure out how to improve himself.  And it may not be in the ways he thinks.

Thinking about it after the fact, I kind of like the idea of a little guru in my pocket.  Oh, it would be super annoying, but it would ultimately WORK (I hope). Gangsei manages to write a book about a middle grade boy that isn’t about his being involved in a sport or obsessed with a video – just a book about a kid who wants, somewhat reluctantly, to be a better version of himself.