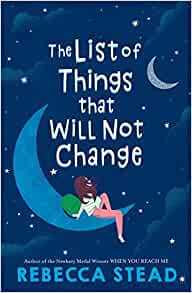 When Bea’s parents divorced, they gave her a notebook with a small list of things that would not change because of the divorce.  Since that day, Bea, now 10yo, has been adding to the list.  Now Bea’s dad is about to marry his partner, Jesse, and Bea is sure that Jesse’s daughter will be her best friend. Sonia, however, is not so sure.  It will take time, but perhaps as the wedding approaches, things will get better. Especially if Bea secretly invites Jesse’s brother Mission, who hasn’t spoken to Jesse for years.

Bea’s earnest personality, despite her absentmindedness, despite her bouncing back and forth each day from parent-to-parent, carries this story that bounces back and forth in time just like Bea. It does take getting used to the bouncing – if you don’t read the time clues you can get lost.  But Stead weaves together little several different challenges and themes into a coherent whole, teaching readers about themselves and about the world.