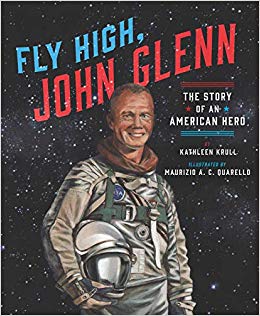 John Glenn always wanted to be a pilot - his childhood room was so full of model airplanes it looked like an airport. By high school he was looking for routes to become a pilot, and by the time he was 20 he had his license. He was a fighter pilot during World War II, earning multiple medals. It was no surprise he worked hard and became part of the first 7 astronauts in the United States, and became the first American to orbit Earth.

2019 was an important moon landing anniversary, and there were a lot of space/moon/astronaut titles last year. I like that the publishers waited on this one - because John Glenn was more than just another astronaut. He was also a politician and a war hero and served his country in different ways. The illustrations are stunning, and Krull's text is spot on (as usual). An interesting read, and I do love the picture book biographies.