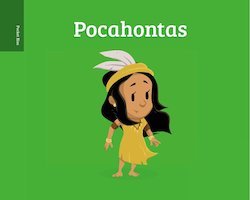 Pocahontas is a Native American who was born in 1595.  When the English started to build a colony called Jamestown, Pocahontas’ tribe and the English came in contact.  Pocahontas tried to keep the peace between the different cultures, but when war eventually broke out Pocahontas was kept as a prisoner.  She married a man named John Rolfe and accepted Christianity, had a child and went to England where she died.

This is a great summary about Pocahontas.  It clears up some of the myths and gives a basic description of the events of her life.  At the back there is a timeline, four people who were important to Pocahontas’ story and other interesting facts.  As with all the Pocket Bio series, I think they have great appeal and are a fun introduction to historical figures but have a hard time with the $15 price tag.