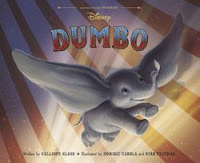 Dumbo is a baby elephant born at a small, ragged circus. His enormous ears make him initially the butt of many jokes, but prove to be his saving grace when he uses them to fly. After his mother causes a ruckus in his defense, she is sent away from their small circus. Dumbo's flying fame soon allows the entire circus to move to a huge enterprise called Dreamland in NYC, and there he finds his mother again. But when the mean Dreamland owner refuses to let them be reunited, Dumbo's circus friends help him and his mother escape together and make a new life in the freedom of the jungle.

This is the storybook version of the new live-action Dumbo movie in theaters and the book is a great re-telling for younger readers. I really enjoyed the simplification of the story and the illustrations are nice--I was amused that Danny Devito's character very much looks like him in the book, too. Overall this is a great pick for fans of Disney and/or the new Tim Burton film.